So, pretty much five months exactly after we got engaged, we decided to up and elope to New York, just the two of us! We managed to keep the whole thing a secret – don’t ask me how – and it was wonderful!

I know you lovely lot have so many questions about it, so I’m putting together a little tell-all post on why we did it, what we did and where we did it. It’s a bit of a crazy story…

I’m going to preface this by saying that I never grew up dreaming of a big wedding – I’m the only girl out of a family of boys (I have three brothers!), even my mum is pretty laidback when it comes to the whole gal thang.
Anyway, I just never imagined a wedding for myself… I really truly never gave it any thought until we got engaged. I didn’t know what dress I wanted (I decided a few weeks before the elopement!), or have any idea what kind of venue I’d like (church? Probably not. Outdoors? Possibly… imagine worrying about the weather though!)
A wedding was just never something that mattered to me, but as soon as we got engaged, I wanted to get married! I had to lock him down, girls.

What I will say, is that it’s way too easy to get caught up in that Pinterest idea of a wedding!
I had a wedding board that I pinned to a lot in the first few weeks after we got engaged, you just get carried away! Before you know it you have that Kimye flower wall in mind… (totally considered it).
We made a list of what mattered to us – flowers (but not flower walls), speeches, cute photos… – and stuck to the important stuff.

I also felt like a wedding would be a little too much for me, and actually after we eloped I said “that was TOUGH! How the hell would I have coped planning a proper wedding!?” – because really, getting hitched can be a lot to take on, whatever you choose to do.
I admittedly don’t deal well with stress, and Jordan and I also just prefer a pretty hassle-free life. I would never have enjoyed a big day with lots that could go wrong, and I really wanted to relax and feel only good vibes my wedding day. So we just made it a small deal, and in the end it was pretty chill and SO much fun! Also very, very sneaky…

Maybe the biggest issue was the logistics of getting everyone together. I’m very close to my family, and Jordan is to his too. Even just nailing down a small guestlist for an intimate ceremony is one of the hardest things… so we bailed on that pretty quickly.

My family all live in New Zealand, and Jordan’s are all based here in Glasgow, so it was hard to have any sort of wedding traditions. In all honesty, I found wedding planning knowing I couldn’t really include my mum and gran, really, really tough. And with the (still quite recent) passing of Jordan’s mum… I don’t know, it was upsetting to plan a day without her there.
Also, we would never have gotten away with eloping with Jordan’s mum still here, so we thought of it as a final gift from her.

The above combined with everything else was just too much. Both mine and Jordan’s grandparents couldn’t travel at all, so there was no way we would ever get everyone together.
We initially planned to have a very small intimate ceremony in Italy next year, but to ask our loved ones to travel for us was just… a big ask. Eventually we said to one another “if we can’t have everyone there, let’s have no one there!” and that’s exactly what we did. What can I say, we’re selfish!

Eloping worked for us, because we’re laid back and didn’t fancy spending the money on one day, and we don’t have the typical family dynamic. I’m not saying it’s right for everyone, but it was the right thing to do for us!
We decided not to tell anyone because we didn’t want anyone to be upset, or ask to come or talk us out of it.
That was a very good idea because after it was all said and done, our loved ones were only blissfully happy and overjoyed for us (although also very very shocked!!).

So how do I feel about eloping one month on? It’s funny because I really thought I’d want to plan a small ceremony in New Zealand, and have more celebrations, but now I really feel content with what we’ve already done.
After getting back from New York, we had a sort-of wedding party (we planned it as our engagement party – again, sneaky!) and we included a few traditions. I think that’s what I loved most about eloping, we totally took what we wanted from it – we didn’t want the hassle of a wedding party with bridesmaids and all that, but we wanted our closest friends to do speeches (best thing ever!), I didn’t want to walk down the aisle but I was totally okay with a first dance (so much fun!) and we also did little things like cutting the cake, playing our (surprise) wedding video and celebrating with our favourite people!
I also really liked how chilled and carefree I could be on the night of the party, because I felt like I’d already had my day back in New York!

Something I learnt about weddings, and this is something I really want other brides to know, is that after it’s done, you don’t really care about the details! I am just so, so happy to be married to the best guy in the world.
It seemed like such a big deal at the time, but I’m so glad we didn’t throw our life savings at one day, or ask a lot from our loved ones for a day that would be special no matter what.
I learnt a lot about myself when I eloped, and I’m just beyond happy to be spending my life with my favourite person.

So that’s the story of why we eloped! We’re crazy cats. I also uploaded a video here, if you’d like to hear a bit more about the day!

Yay for eloping to your favourite city with the very best person in the world! 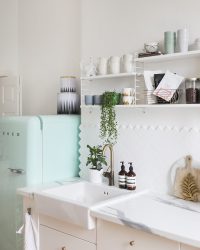 Open Shelving In Our Kitchen.