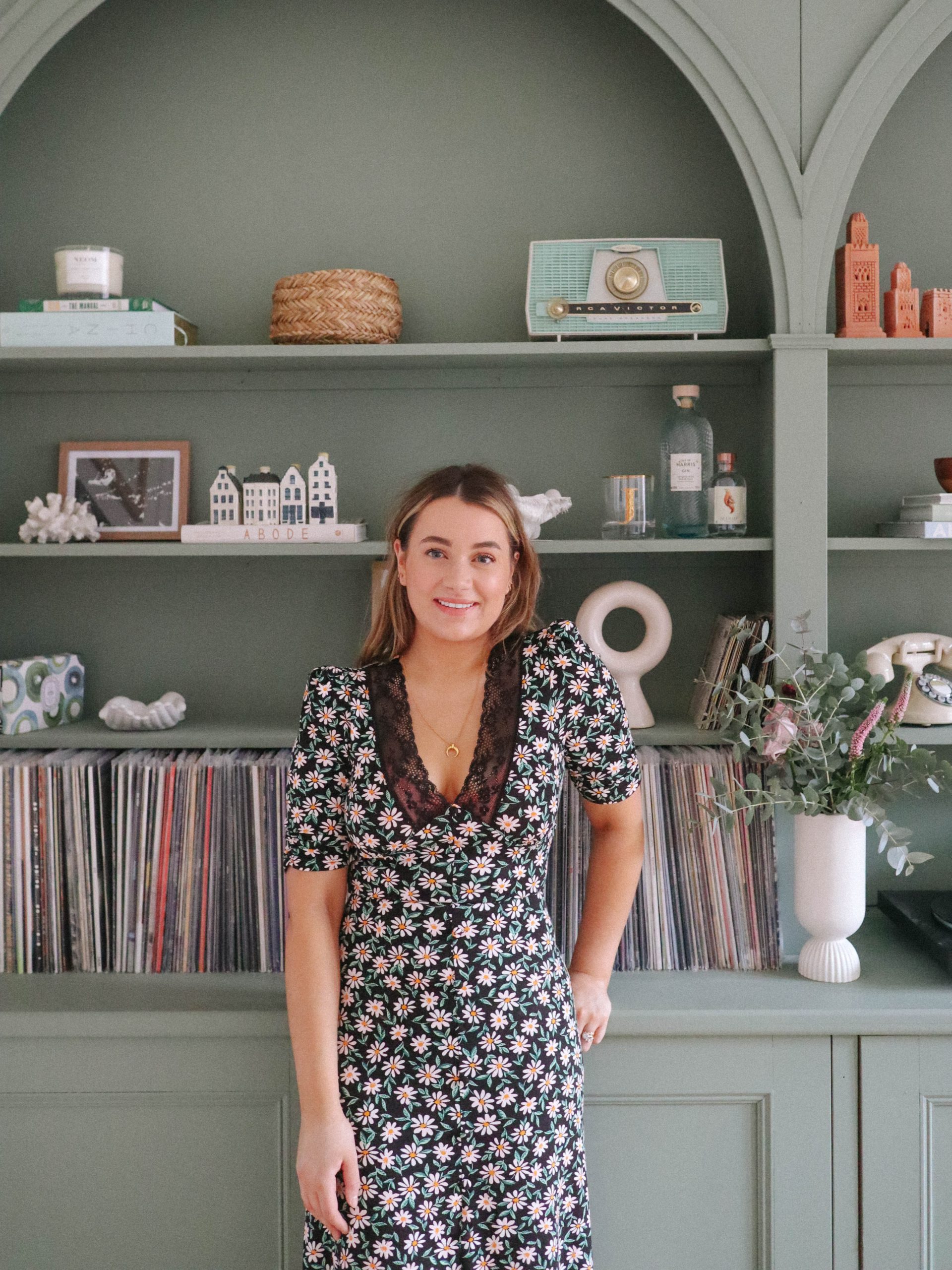 This is one of those posts I get asked about all the time; which record player do we have? Are the Marshall speakers worth it? What are my favourite vinyls?
I’ve been meaning to put together a post on our set-up for so long, and recently we switched things around a little so it was the perfect time to show you the sound sitch around our home. Spoiler: we really like listening to music.

Some of you may remember we had a Crosley player hooked up to a speaker in our old place, but we decided to up our game and get something a little better. I actually got this Sony Bluetooth Turntable for Jordie for Christmas one year, so I really had to do my research! It had great reviews and reasonably priced so I decided to go for it, and it’s a great bit of kit.
The bluetooth connects quickly and easily, the sound is perfect and it looks good too – you can remove the top to make it look tidier and pop it back on when it’s not in use.
We had it connected up to our Marshall Acton Speaker, which we’ve had for years and years, but recently we thought we needed something with a bit more punch, so we levelled up and got the Marshall Woburn. It’s a big boy! This one has Alexa enabled, but we tend to just use it for the record player, since we already have a Sonos in our living room (more on that to come).

The quality of the Marshall speaker is really impressive, making our records sound better than ever. It’s such a dreamy ritual to play records, I love to put on albums while I do the housework on the weekends, and Jord will often sit with a coffee in the mornings listening to his favourite vinyls. It’s makes those moments just that extra bit special, hearing the slight crackle of a record and the way the sound is smooth and a little vintage. I love it.

Our record player, speaker and records sit on our green shelves, we actually designed the shelving unit with this setup in mind so the bottom shelves fit records perfectly, and we had hidden cabling solutions popped in so there’s no cables on show. Jord’s hoping to build his record collection so we fill another section, which is… ambitious to say the least.

Other Speakers Around The Flat

We are music mad in our house, so we’ve got a speaker in every single room – probably a little excessive, but it’s who we are as people.
A few years ago I was gifted a Sonos and I love it, it’s always been in our kitchen and it’s lovely to be able to listen to music while we cook. Recently we bought another and popped it in the living room so that they connect up. It means that while we’re making dinner, setting the table and eating dinner, we can hear the same playlist continuously and don’t have the added hassle of switching over the music. That extra few minutes was a palaver I could do without, thank you very much.

As for the other rooms, we already had an Amazon Echo in the office, so we decided to buy an Echo Dot for the bedroom, which is tucked away but provides us with morning music. We usually set a song as an alarm or just ask Alexa to play something chill while we sip our coffee in the morning.  If I’m getting ready/working/shooting, I like that the office and bedroom can be connected and play the same songs – I’m always between these two rooms while I work so it’s fun to be able to listen to some upbeat tunes while I’m going about my day.

In the spare room, we popped our old Marshall Acton in there to go with the musical theme. Obviously we won’t be having guests any time soon but I think it’s a cute addition to the colourful space.  As for the bathroom, we have a portable Marshall Stockwell – I don’t think they make these anymore, although the Uxbridge looks similar, but it’s a great little addition! We take this on trips away with us, and it really holds a charge! While we’re at home, though, it remains in the bathroom for obligatory shower singing. Gotta be done, kids.

We always knew we would have a vinyl wall in the flat somewhere, but with the green shelves already holding most of our records, we weren’t sure where it would fit in. Eventually, the spare room started to take shape and we added it in here. We used the Vinyl Wall shelves in the natural finish, placing nine above the chest of drawers in this room. I love that you can change out the records easily so the space can have a totally new feel – it’s such a fun feature!
My friend Em and her boyfriend make the vinyl shelves and kindly gave me a code for 15% off, just use KATE15 at checkout.

Over the years, we’ve collected so many records – we try to slowly build our collection and it’s a good mix of both mine and Jord’s favourite albums. If we can’t find the albums we want in record shops or on Amazon, Jord usually hunts them down on Depop or eBay. He’s gotten good at finding them, and he’s managed to snab some great ones lately!
We recently got a limited edition pressing of Pronoun’s album which was such a good find, and I also added Taylor Swift’s 1989 to our collection, along with both of Japanese Breakfast’s albums, and I think we now have both of Lorde’s records too. All the gals!
Then we’ve got the classics, like most of the The Killers releases (yes, all classics – do not come for me), Fleetwood Mac, Roxy Music, Blondie, Elton John and even a little bit of Bon Iver, Julia Jacklin, Better Oblivion Community Center and Sonic Youth. A mix, but a good mix, I think we can all agree.
We even have Spice Girls album on vinyl – which, FYI, is the first album that both Jordie and I owned on cassette. Don’t say we’re not cool cats.

We tend to buy each other a few records for birthdays and Christmas and then we’ll treat ourselves to one or two a month if we find them cheap. I can’t wait for second hand shops to open again so we can buy some random jazz records and old albums we’ve forgotten even existed! We always talk about how we’ll spend hours in our favourite record shops going through every single vinyl seeking out our favourites – it’s funny the things you miss eh?

So that’s our setup! I have music playing at all times so it makes sense we have speakers throughout our flat. There’s never not a record spinning or a playlist plugged in, it makes me so happy to have background music to soundtrack the day.

What do you think of our setup?

My Goals For February.